Join the Team – Now Recruiting for a Head of Investment

As revealed in City AM – new data we've compiled shows that that the number of super-rich Chinese individuals applying to live in the UK through investor visas jumped by a third last year.


The number of Chinese High Net Worths and Ultra-High Net Worths applying to live in the UK on a Tier 1 Investor Visa increased 32% last year to 202* (year end September 30), up from 124 the previous year. These applications were made up of 171 from mainland China and 31 from Hong Kong. 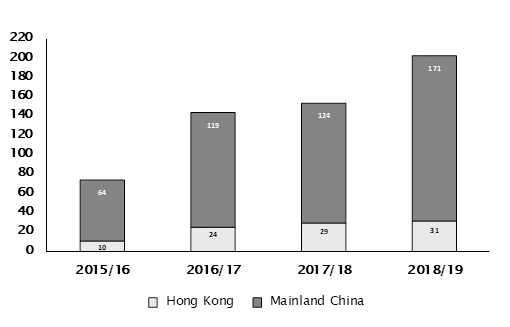 The Investor Visas entitle those who invest £2m or more in the UK to reside here for 3 years and 4 months, with the possibility of a two-year extension. Delays when applying for the equivalent US investor visa, caused by large backlogs and uncertainty over recent rule changes, has forced a growing number of Chinese HNWs and UHNWs to apply to the UK instead. It has been reported that Chinese applicants for the US investor visas face an incredible wait of up to 16 years before being approved.

The UK is seen by many foreign investors as one of the securest jurisdictions to hold assets due to our stable political and judicial systems. The UK is also attractive due to our track record of protecting investors from the state seizure of legally obtained assets, which occurs in some emerging markets.

Many Chinese investors are looking to take advantage of the fall in the value of the pound, which has made UK assets cheaper relative to other countries such as the US. Trade tensions between the US and China have also made the UK a more attractive destination.

“Fears that the UK’s Investor Visa programme would be pulled by the last UK Government, and long delays when applying to the US, resulted in a surge in UK applications during 2019.”

“The General Election result has provided greater certainty over the future of the UK economy and its tax regime. This certainty is important for foreign investors looking to diversify away from their home markets.”